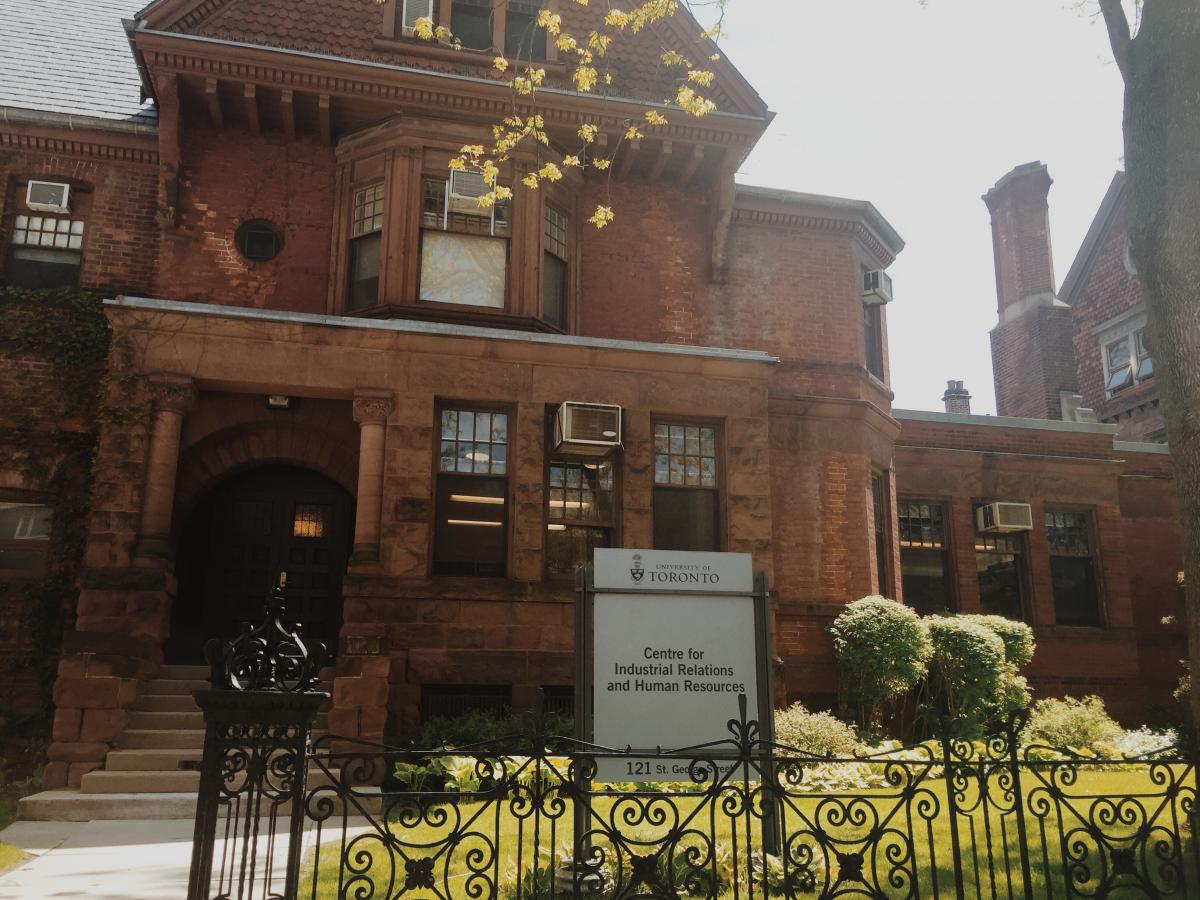 The CIRHR Director's Debate is a new series of public talks given once a term aimed at students and alumni of the Centre for Industrial Relations and Human Resources program and those interested in real-world HR and Labour Relations issues.
Rafael Gomez, Director CIRHR

Michael Barzelay is Professor of Public Management at the London School of Economics. He is author, most recently, of Public Management as Design-Oriented Professional Discipline (Edward Elgar, open access). His earlier books include Breaking Through Bureaucracy: A New Vision for Managing in Government, The New Public Management: Improving Research and Policy Dialogue, and Preparing for the Future: Strategic Planning in the U.S. Air Force. He has been co-editor of Governance and Head of the Department of Management at LSE. He holds a PhD in Political Science and a Masters in Public and Private Management from Yale.

"Canada has a long history of union victories that have defined national events and made for a more just and humane society, led by Canada’s most prominent unions," writes Christo Aivalis in the Globe and Mail, December 2018. And in Maclean's (August, 2018), "Today’s trade unionists and their political allies must lay the groundwork for a new economic order, where no matter what happens to the concept of jobs as we understand them, there will be a social and economic role for the Canadian working class."

Christo Aivalis is a SSHRC Postdoctoral Fellow in the Department of History at the University of Toronto. He is an Editor of Active History, and is also the author of The Constant Liberal Pierre Trudeau, Organized Labour, and the Canadian Social Democratic Left. His most recent project has been a new introduction for a primary source book on the Winnipeg General Strike, and he currently is working on a biography of Canadian labour leader A.R. Mosher. He is a regular voice on Canadian news radio and television, and his writing has appeared in The Globe and Mail, The Washington Post, and Maclean's.

Lawrence M. Kahn is the Braunstein Family Professor and Professor of Economics at Cornell University. He is an elected Fellow of the Society of Labor Economists. He is a Research Fellow of the Center for Economic Studies/Ifo Institute for Economic Research in Munich, Germany, of the Institute for the Study of Labor (IZA) in Bonn, Germany, and of the National Centre for Econometric Research in Australia (Sportometrics Program). He was Chair of the Labor Economics Department at Cornell during 1998-99 and 2000-2005, is Co-Editor of the ILR Review, is on the editorial board of the Journal of Sports Economics, served as Associate Editor of the Industrial & Labor Relations Review and Specialized Co-Editor (for Sports Economics) of Economic Inquiry and was on the Board of Editors of Industrial Relations. Before joining the Cornell faculty in 1994, he was a Professor of Economics and Labor and Industrial Relations at the University of Illinois. He has served as Visiting Fellow in the Economics Department of Princeton University, Visiting Scholar at the Russell Sage Foundation in New York, Visiting Scholar at the Academia Sinica in Taipei, Visiting Scholar at the Office of Labour Market Policy Evaluation in Uppsala, Sweden, and Visiting Fellow at the Australian National University. He has also served as a member of the National Academy Sciences Committee on Women’s Employment and Related Social Issues.

Otto Kässi, is a labour economist with a background in econometrics and is the creator of the Oxford Internet Institute (OII), where he has been since 2015. The OII is a multidisciplinary research and teaching department of the University of Oxford, founded in 2001. Dr. Kässi's research concentrates on empirical study of online labour markets, primarily through the ERC funded project iLabour: The Construction of Labour Markets, Institutions and Movements on the Internet. His pioneering methods developed the Online Labour Index, the first economic indicator that provides an online gig economy equivalent of conventional labour market statistics. Dr. Kässi is also affiliated with the OECD as a Future of Work Fellow, where his work focuses on megatrends that are affecting job markets, and the challenges faced by governments in the areas of social protection, skills development and labour market regulation. He earned both Master's and Doctoral Degrees from the University of Helsinki. His studies concentrated on labour economics with a particular emphasis in econometric and statistical methods. Prior to joining OII, Dr. Kässi worked in an online advertising start-up as a data scientist.

Alan Benson received his PhD from the Institute for Work and Employment Research at the MIT Sloan School of Management, where his dissertation advisors were David Autor (MIT Economics) and Paul Osterman (MIT Sloan). He received his Bachelor's degree from the ILR School at Cornell University. He is also on the Graduate Faculty of Minnesota's Department of Applied Economics and the Minnesota Population Center (MPC), and is a member of the Social Media and Business Analytics Collaborative (SOBACO).His research is in personnel economics, a branch of labor economics that concerns employment issues within firms. He works with companies to analyze their compensation plans, incentives, and staffing practices for the primary purpose of improving organizational performance. He's done research with business-to-business salespeople, retail salespeople, police, firefighters, nurses, and manufacturing workers, and his research has been covered by national news outlets like the Wall Street Journal, the Washington Post, NBC News, PBS Newshour, LA Times, Deseret, the Baltimore Sun, and others. His current projects examine the effects of monitoring on productivity, job transfer policies, promotions from sales to sales management, how workers evaluate employers' reputations, and how managers screen job candidates.

Matthew Dimick is Professor of Law at the University at Buffalo School of Law. His scholarship explores the relationship between the law and economic inequality. Recent projects include a theoretical and empirical study of the relationship between altruism, income inequality, and preferences for redistribution in the United States; a theoretical and case-study analysis of the politics of regulating low-wage work in wealthy democracies; and the role of minimum wage legislation in an optimal redistribution policy. Currently, he is working on a book manuscript about the law and economics of redistribution and income inequality.

His research has appeared in generalist law reviews and peer-reviewed economics, political science, and sociology journals, and has been featured in The Atlantic, Vox, and the On Labor blog. He has taught courses in federal income taxation, tax policy, labor law, employment law, comparative corporate governance, and comparative and international labor and employment law.

He holds a PhD in sociology from the University of Wisconsin-Madison and a JD form Cornell Law School. Prior to coming to the University at Buffalo Law School, Dimick was a Law Research Fellow at Georgetown University Law Center. After law school and before graduate school, he worked for the Service Employees International Union in Washington, DC.

Adam Seth Litwin is Associate Professor of Industrial and Labor Relations at Cornell’s ILR School. Litwin’s research, anchored in industrial relations, examines the determinants and impact of labor relations structures and technological change. His doctoral dissertation, completed at the Sloan School of Management at the Massachusetts Institute of Technology, focused specifically on employment relations and information technology in the healthcare industry. It won the Alfred P. Sloan Foundation’s annual prize for the top dissertation in industry studies. Since then, he has published a mix of empirical and conceptual studies intersecting the areas of labor relations and technological change, in both industrial relations and medical journals, including the Industrial and Labor Relations Review, Industrial Relations, Advances in Industrial and Labor Relations, Human Resource Management, Applied Clinical Informatics, and the International Review of Psychiatry. At Cornell, he teaches undergraduate and graduate core courses in labor relations as well as electives focused on the evolution and impact of technological change on workers, organizations, and society-at-large.

Litwin joined Cornell’s ILR faculty in the fall of 2014 after serving as a standing faculty member at Johns Hopkins University, where he held appointments in the Carey Business School and the School of Medicine. Before earning his PhD from MIT, Litwin conducted research on industrial relations institutions in Great Britain as a Rotary Foundation Ambassadorial Fellow at the London School of Economics. He also put in time “inside the beltway” as a research assistant at the Board of Governors of the Federal Reserve System in Washington.

Dr. Adams is a globally recognized expert in international and comparative industrial relations and international labour and human rights law. He has written extensively on public policy regarding labour issues, industrial relations theory and freedom of association as a human right. He has authored or co-authored over 150 publications including seven books, thirty four book chapters, and more than 50 articles in peer-reviewed journals and conducted research and lectured at universities around the world.

A consultant to international agencies such as the International Labour Organization, in 1997 Adams founded the Society for the Promotion of Human Rights in Employment whose mission is to promote awareness, understanding and respect for core labour rights as human rights. In recent years his work on freedom of association has frequently been cited by the Supreme Court of Canada.

Listen to a first–hand account of what it’s like to run the HR and labour relations system  in one of the largest organizations in Canada, the University of Toronto, employing more than 20,000 workers.Negotiating with both traditionally certified trade unions such as the United Steelworkers of America and with an association of faculty members and librarians, Professor Hildyard’s 15 years of experience as Vice-President of Human Resources and Equity at the University of Toronto offers an invaluable window into the study and practice of labour negotiations and human resource management. Though not a debate in the formal sense, Professor Hildyard will be evaluating the pros and cons of collective bargaining as well as the many lessons for those in the field of HR and labour relations. She will also be available for questions from the audience.

Angela Hildyard was appointed to the position of Vice-President, Human Resources and Equity at the University of Toronto in 2001.  In December 2013 she was re-appointed for a further two-year term to June 30, 2016 making her the longest serving Vice President in the history of the University of Toronto. She is responsible for employment and labour relations for 10,000 faculty, librarians and staff plus 7000 teaching Assistants and Stipendiary instructors as well as 5000 casual staff within 28  different  employee groups;  she is accountable to the Governing body for Equity and Diversity;  is responsible for environmental health and safety; and is a standing member of the High Risk Committee. Formerly an Associate Dean and then Dean of the Ontario Institute for Studies in Education  and the Principal of Woodsworth College. A Professor of Higher Education at the Ontario Institute for Studies in Education, she continues to teach graduate courses and supervise doctoral students. President of Senior Women Academic Administrators of Canada (SWAAC), a networking organization for women holding senior administrative positions within the post-secondary sector.